The Lewiston family brings an ancient apple orchard to life 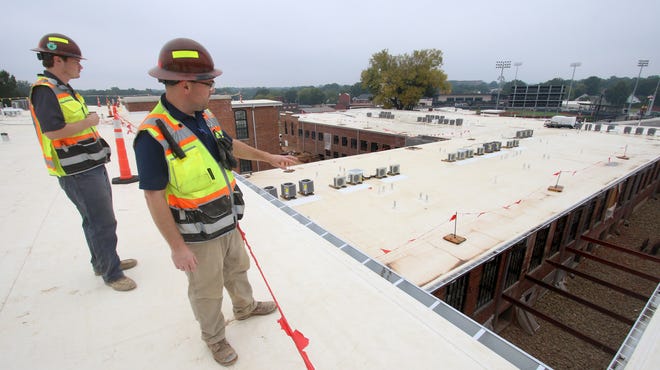 Trenton Mills Lofts expected to be completed by January 2022

Jennifer Dolloff Barker, middle, husband Jeff Barker, right, and daughter Holly Lavorgna, left, stand outside the store owned by her son, Sabin Lavorgna, on Sunday at Honey Hill Orchard on Ferry Road in Lewiston, where it is found the former Benoit’s Orchard. Russ Dillingham / Journal of the Sun

LEWISTON – Sabin Lavorgna called his mother shortly after the start of the pandemic to tell her he would be buying the former Benoit apple orchard.

The Lewiston High School graduate was 24, lived in California, several years enlisted in the Navy.

“I say to myself, wait, what? Jennifer Dolloff Barker said. “I said, ‘Why? He said that because I want to invest in something, I want to put my money somewhere safe and what better place to put it than an apple orchard so I have something to come home to.

Sleeping at least five years, its 20 acres were severely overgrown. His family in Lewiston knew nothing about farming or apples, but Barker’s first impression as he walked the property was, “He’ll have nothing to come home if we don’t save these trees.”

She, her husband Jeff and her daughter Holly Lavorgna started reading and cutting brush when they were not at work. Strangers came with equipment and advice.

And while it wasn’t planned, Honey Hill Orchard opened earlier this month.

“We had such a beautiful bloom this spring,” said Barker. “It was like they just woke up and thanked us for sorting them out.”

Holly Lavorgna weighs apples Sunday for a customer after returning from picking at Honey Hill Orchard on Ferry Road in Lewiston in the former Benoit’s Orchard. Russ Dillingham / Journal of the Sun

She is not sure what drew her son’s attention to the property at 266 Ferry Road. Growing up, her best friend lived across the street from Benoit’s and on Sunday mornings, after spending the night, the two headed to the orchard to swap odd jobs for cider donuts.

His best friend passed away two years ago.

“Although Sabin didn’t say anything, I think buying Benoit was a nod to (his friend), but I’m not sure,” she said.

Not too far in their major clean-up effort, Barker said an “80-year-old sprite” who had worked in the orchard in the 1990s one day showed up and coached the couple on tree pruning.

“He would make a row of trees and my husband and I would make a tree; It seemed like such a difficult task and such an overwhelming task at the start of last year, but we have accomplished a lot more than I expected, ”she said.

The same man identified the 12 varieties of apples on the property. Differentiating between them all is a work in progress, said Barker. “I’m learning. When I look at them, they look alike. They look like an apple.

When an orchard owner in southern Maine heard the place was coming back to life, he contacted the industry and lent the family their spare sprayer.

“To buy this new thing, it’s $ 20,000,” she said. “We went there with a trailer, hoisted his sprayer onto the trailer and brought him home and we’ve had him since then, and we’ve never met him before. It is simply unreal that they are so confident and united in this apple community. “

Honey Hill Orchard is open on weekends only, 10 a.m. to 4 p.m., for pick-your-own. They are closed this Saturday, September 25.

The orchard also has peaches and plums, and next month, pumpkins. While walking around with a plant identification app on his phone, Barker also found olive trees and vines. It is planned in the coming fall to bring back apple cider donuts as well as cider.

Sabin has visited once since its purchase. A ship in the orchard’s playground sports a Navy flag as a nod to it.

Barker said he had at least four years left before returning to Maine.

He and Holly are both Lewiston Youth Advisory Council alumni.

“I think he’s going to be the mayor of Lewiston when he gets home, to be honest with you,” Barker said. “He loves this community.

Jennifer Dolloff Barker, left, her husband Jeff Barker and daughter Holly Lavorgna inside the store owned by her son, Sabin Lavorgna, on Sunday at Honey Hill Orchard on Ferry Road in Lewiston in the former Benoit’s Orchard. Russ Dillingham / Journal of the Sun

Please check your email to confirm and complete your registration.

Use the form below to reset your password. When you submit your account email, we’ll send you an email with a reset code.